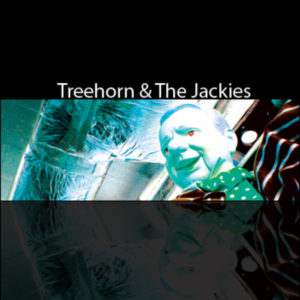 “When you wake up in Memphis in a booze-induced haze with a bus ticket stapled to your chest you look to blame everyone else but yourself. It was the Southern Rock God’s Tour and I was clean and green until that first night at the Gwinnet County Fair and Jackie introduced me to one of his good friends: a green bottle of whisky. He said it would help me finish every note. Now I’m downin four bottles a day…because of Jackie. Then he has the nerve to kick me out of the band? I AM the Treehorns!”
—Django Treehorn

After their much publicized falling out Jackie and his one time side man, Django, have since not spoken. Django went on to form his own band, Treehorn & The Jackies. Critics have panned the act as a “frantic attempt to ride past glory while continuing to cash in off the long shadow of another’s success.”

Still, Django insisted that his band be included on The Tribute Album. “We chose the song ‘StarFucker’ cause let’s face it; Jackie knows he is totally obsessed with me—he wrote this song about the poems I sent to Starlett—and the few times he caught me at her window.”